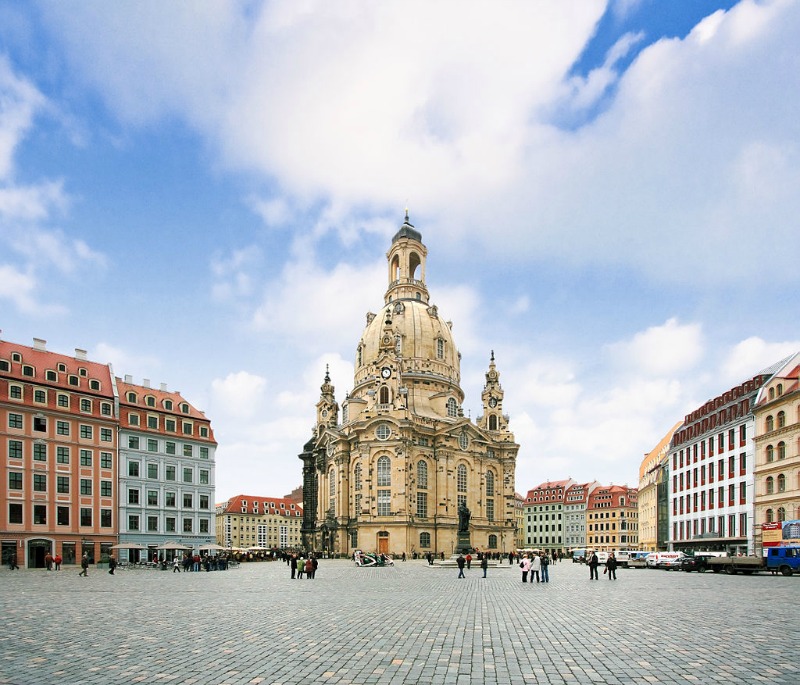 Dresden is the capital of Saxony, which is a free state in Germany. It’s rich in culture and history and is known for its rococo and baroque architecture, which is why it’s called the Jewel Box. Its palaces, museums, churches and other structures exude impressive elegance. This is also where the royal residence of Saxony was located. The center of the city was destroyed during the World War II. However, important pieces that are part of its history were moved before the bombings started and they can now be seen in its various museums. Dresden underwent restoration to bring back its old beauty before the war. If traveling to this city, here are some of the top attractions that you shouldn’t miss.

This is considered as one of the most gorgeous churches in Europe. Its original Baroque structure was reconstructed after being hit by the bombings during the World War II in 1945. However, its reconstruction was completed and it became open to the public once more. Thousands of the stones from the original building were included in the reconstruction and a gold cross that was given by Great Britain. Climbing the top of the dome is a must do if you want to get the best experience on your visit and be amazed of its fantastic interiors. This is also where you’ll get a glimpse of the view of the city’s main square.

It used to be part of the city’s fortress where cannons were placed. Today, it’s one of the most popular landmarks in Dresden. This multicomplex museum has different collections and exhibits, as well as gardens and pavilions that are worth exploring. There’s also the Nymphenbad, which has the figures of female mythological creatures that are impressive work of arts. Some of the collections that you should see are the Old Masters Picture Gallery, Royal Cabinet of Mathematical and Physical Instruments and Dresden Porcelain Collection. If you’re into animals, check out the Zoological Museum or if you’re interested in centuries old weapons, head to the Historical Museum.

This is best known as the Balcony of Europe, which used to be a private garden that was built in 1738. It was in 1814 and it was opened to the public. Take the steps on staircase and explore the area where you could see a group of sculptures that represent night, evening, noon and morning. There are benches where you could sit as you feast your eyes with the amazing sceneries, especially the architecture of the structures around it. Moritz Monument can be found here, which had been standing since 1553. Other places to see are the College of Art and the Dolphin Fountain that had been part of the original garden.

This stunning castle served as the royal residence of the kings and electors of Saxony for over 400 years. It’s now part of the museum complex Dresden State Art Collections. The collections of Augustus the Strong can be found here including ivory, jewelry, silver and gold that date back from the 14 century. Other interesting areas are the Turkish Chamber with collections from the Ottoman Empire, Dresden Armory where armors and weapons used for ceremonies can be found and the Print Cabinet with art collections from various artists dating back from the 15th century.

Other top attractions in Dresden include Procession of Princes, Hofkirche, Semper Opera House, Yenidze and Theaterplatz.

2nd image by X-Weinzar (Own work (Taken by myself)) [CC BY-SA 2.5 (http://creativecommons.org/licenses/by-sa/2.5)], via Wikimedia Commons