Seville is the capital of the region of Andalusia. This is one of the top destinations in the southern part of Spain. It’s not a surprise that tourists flock here because it’s rich in culture and history, and it also doesn’t fall short of amazing things to see and experience. Its medieval architecture, lively festivities, bustling night life, romantic ambiance, the refreshing orange scent caused by the orange trees that line the streets, lush green parks and fantastic arts are just some of the reasons why it remains to be a favorite place of travelers. If visiting this gorgeous and charming city, here are the things that you should do when you get there.

It used to be the Jewish quarter of the city. Although it had a violet past as several Jewish were killed as they were forced to convert to Christianity, it’s now a laid back, pleasant neighborhood that’s beaming with medieval character. There’s the white washed houses with colorful and eye catching patios, as well as the cobblestone streets that are tiny for the vehicles to pass. This means that you would be able to explore the neighborhood by feet and at your own pace. There are also restaurants serving the popular Spanish tapas. While here, you may also want to visit the Hospital de los Venerables Sacerdotes and Centro de Interpretación Judería de Sevilla, which are two of its most visited museums. You may also relax at Jardines de Murillo, which is a pretty garden with several tiled benches, fountains and palm trees.

Spain is known to be a Christian country and some of its most popular attractions are cathedrals and you would find one of the grandest in Seville. The Catedral de Sevilla is a UNESCO World Heritage Site. Construction of the cathedral was started in 1402 and lasted up until 1506. You would be amazed with the gothic structure of this huge structure. Some of the things that you must check out in this place are the Virgen de los Reyes’s crown that’s decorated with gems, the crucifix and candelabrum made by Pieter de Kempeneer, and the Virgen de la Sede. 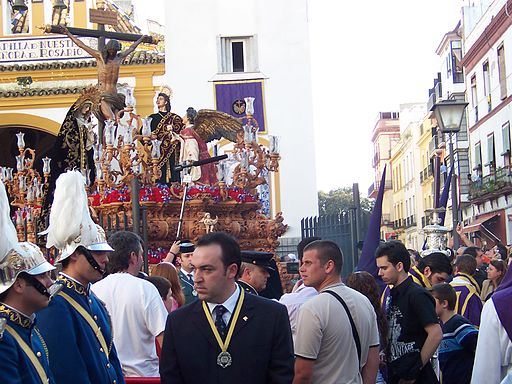 It’s the most exciting festival in Seville. Locals and tourists alike enjoy seeing the elaborately decorated floats of different saints that can be seen in the procession. Ceremonies are also held in the cathedral, which are equally magnificent. If your vacation was not timed during the festival period, you could still get a feel of it by visiting the Basilica de la Macarena, where you could still see the grand float of Virgen de la Macarena and the image of the said saint.

Seville is known for the art of Flamenco, which is a combination of a dance and a song. There are various exhibits in the museum that has something to do with this art including educational items, video displays and costumes. If you wish to watch professional Flamenco performances, these are available every day in the museum from 7:00pm to 8:00pm. It also has a school for teaching this art, in case you want to learn how to do this yourself.

Other things that you shouldn’t miss on your trip to Seville are watch bullfighting in Real Maestranzam visit Casa de Pilatos and go to the historic Barrio de Triana.