Wouldnt it be a wonderful feeling to be in scenic movie locations where some of the biggest movies were shot? Although several movies these days were created in a green room where visual effects were added to make the scenes realistic, many other movies still visit actual locations to shoot. If you want to see where these movies were made, these are some of the most exciting places.

The iconic Indiana Jones and the Last Crusade movie had some of the shots take in Jordan. In the film, Harrison Ford tried finding the Holy Grail as an archaeologist. The movie explored different locations in Jordan. The most significant though is where he rode a horse through a sandstone canyon while heading towards the amazing faade of the Treasure of Petra. You cannot explore the place though, but seeing the faade alone is more than enough.

Who would forget the lovely scenes were the Lord of the Rings were shot? After the movie became a blockbuster, tourism in New Zealand surged. The movie showcased the pristine nature in the country along with the dramatic cliffs and ranges. The Hobbit Holes were man-made, and you can still visit that site until now. The place is now called the Hobbit Village, and you can even hold weddings there. 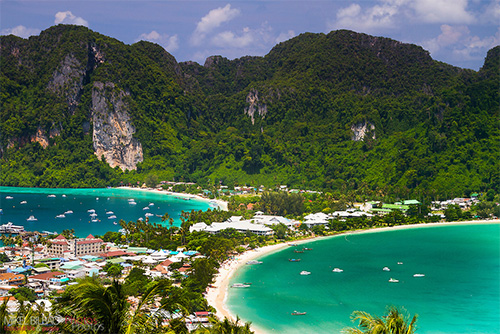 Leonardo Di Caprios The Beach was an iconic movie with the Phi Phi Island in Thailand as the backdrop. It was an action-packed movie, but many people could not help but fall in love with the place. Since the film was a massive hit, it took no time before people started flocking the island. Hence, the movie was both a blessing and a curse for the country. Phi Phi Island remains a tourist destination until now, but the government has somewhat controlled the people visiting the place.

Even without this movie that took the world by storm shot in various locations in London, the city is already a hit among tourists. However, with the global success of Harry Potter, many people became even more interested in seeing what London has to offer. The city created signs in various areas where the movie was shot. You can visit the infamous Kings Cross Station where the Platform 9 can be found. You can also go to the St. Pancras Renaissance Hotel. The location of Hogwarts though is somewhere outside London. The Gloucester Cathedral served as the schools exterior.

Batman: The Dark Knight raked over $1 billion worldwide when it was released in 2008. Some of the futuristic scenes of the film were shot in Hong Kong, although a lot of them were in the US. The citys second tallest tower, the International Finance Center, was where Christian Bale leaped in a jaw-dropping stunt.

These are only some of the locations where great movies were shot. If you plan to feel like you were in the film, you can go to these places now.

Featured and 1st image from https://www.travelpulse.com/news/destinations/indiana-jones-filming-locations-to-satisfy-your-wanderlust.html