Are you one of those who love traveling to places that most people have never been to? If you are in search for places that defy explanations, then read on and you will most likely start packing your bags to travel to these places now.

A well that turns everything into stone might be a story that was just taken out of a fictional book. This actually exists in Knresborough in North Yorkshire. There’s water that trickles down on a cliff where everything that is on its way turns into stone. The entire process could take five months to complete. Back then, it was believed that the place is cursed. There is a leading theory today though on why it happens. The water might contain unusually high levels of mineral content. The process is similar with how stalactites are formed in caves. If you visit there, you will find a lot of things like stuffed toys and bicycles that have become stones.

This is unique in a sense that you need to prepare in different ways depending on when you plan to visit there. The park is located near the Hochschwab Mountains. If you head there during autumn, it looks like your usual park. There are chairs where you can rest and trails that are perfect for hiking. During springtime though, you might be surprised that the place is not even there. It is submerged in water. You have to wear your scuba diving gear to see the place. The explanation is that during the winter, snow piles up on the mountains and when it melts, it drowns the entire park. The beautiful things is that flowers that usually bloom during spring still blooms underwater.

This area has become a subject of several researches. This place just defies science. As the adage goes, lighting doesn’t hit the same place twice. In Western Venezuela, near the Catatumbo River, lighting crashes over the water nonstop for at least 260 nights each year. There are different theories on why this exists, but it seems like there is no definite answer yet. There was even a time when the lightning just stopped altogether for 6 weeks. People thought that’s the end of it. The lightning came back and still hits the place like crazy up to now. 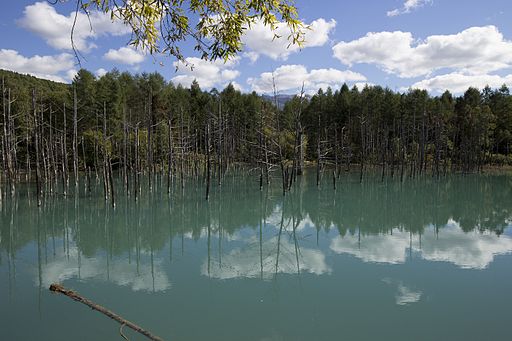 The water in this lake changes colors depending on the angle in which you view it. This is totally different from any other lake that you might have seen. The changes in color are also seasonal, going from shades of blue to green. It was a man-made lake. The main purpose was for setting up a reservoir. The water surprisingly turned into a different color. There are different explanations behind its existence, including the presence of aluminum hydroxide in huge amounts.

This place is impossible for several reasons. They are just a strange field full of rocks lying around. On how the rocks get there, no one knows. The nearest cliff is several miles away so it is quite impossible that landslides have caused them. The stranger part is that when hit with a hammer, they produce a sound that is similar to cymbals.

If these places excite you, go ahead and plan your trip now.

Featured and 1st image by FalkOberdorf at the German language Wikipedia [GFDL (http://www.gnu.org/copyleft/fdl.html) or CC-BY-SA-3.0 (http://creativecommons.org/licenses/by-sa/3.0/)], via Wikimedia Commons